This is what I learned when I attended a workshop on medieval sauces with Laura de Castellet who is a medievalist historian and publicist. She transported us to the best of the time.
I saw images in front of the fireplace roasting a not very luxurious beast, watching that little fat one full of flavour fall. On a night crushing the spices with a mortar by the light of a lamp fed with olive oil.

What do you mean, light the lamp with olive oil?

As Laura explained to us at that time, at least in the area of northern Catalonia, olive trees were few and far between and controlled by the church. Olive oil was a precious commodity for giving light, it was expensive and scarce, so it was used exclusively for this purpose. This is known thanks to the fact that inventories of the time have survived, which were included in the wills.

The cuisine of the time in this area was based on stews and game roasted on the fireplace, as there were no stoves yet. In order to give some flavour to the meat, a container was placed underneath it to collect the juice and the fat that the meat gave off on the fire. This was the base for the sauces.

It was not yet eaten with a fork, but the pieces of meat were cut and placed on a piece of bread or a bowl. And to brighten up the dish a little, sauces were prepared with available ingredients. The meats that were consumed were mainly pork, lamb and to a lesser extent pigeons, snails and squirrels. Cows were used for dairy products and chicken was extremely expensive, usually consumed only once a year. 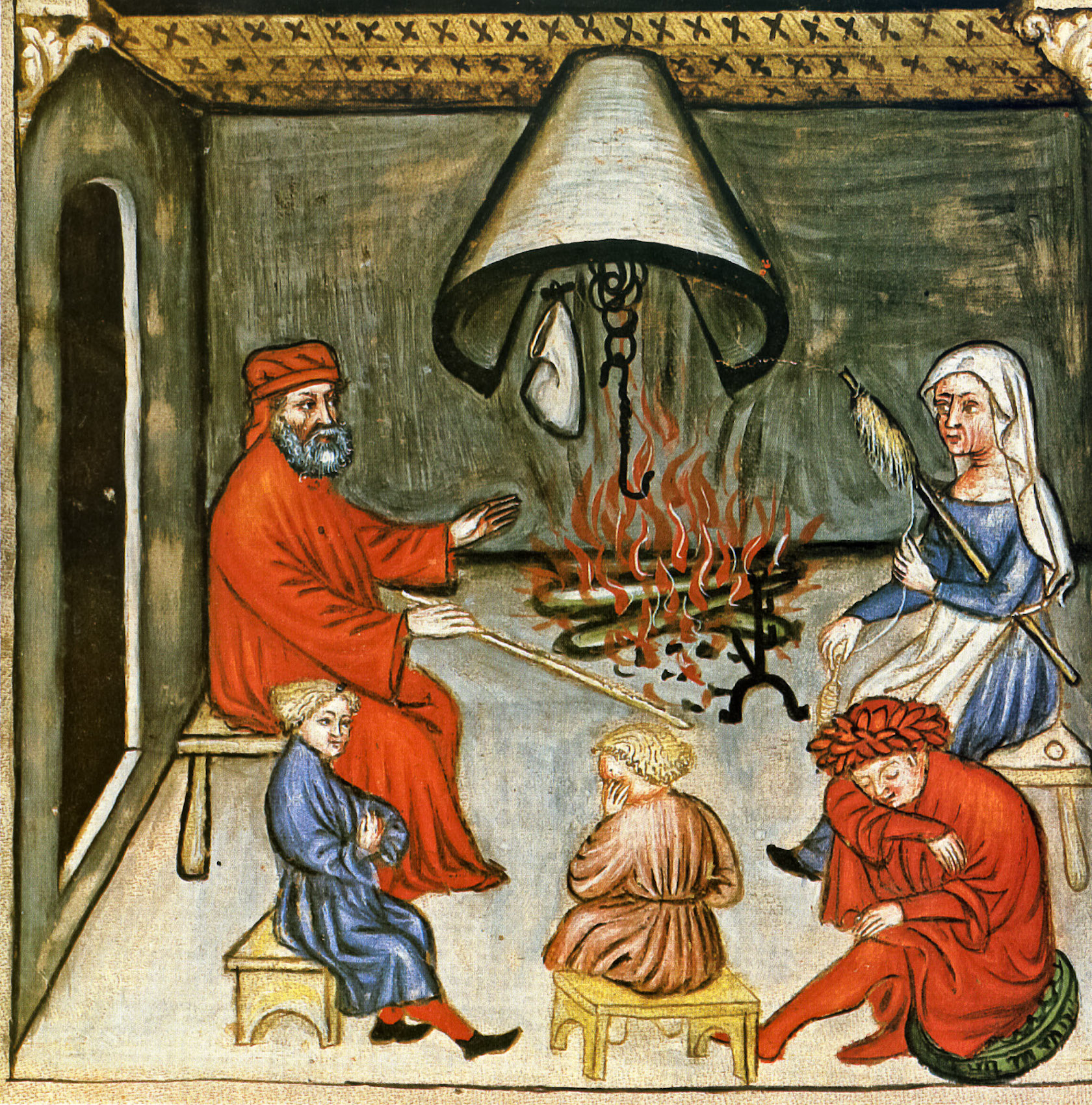 You have to consider that at that time there was a lot of food that had not reached Europe, such as peppers, potatoes or tomatoes, but there were cabbages, onions, carrots, turnips and beans. One product that was available in large quantities was honey, which was used in these sauces to bind the other ingredients. In addition, the contribution of tastes that different honeys gave, depending on the plants that had been pollinated, was highly valued. There was also sugar, but this was sold only through spice merchants by weight and only the wealthy could afford it.

In addition to meat juice and honey, dried herbs, other fatty elements such as almonds, garlic, and some cheeses were added to the sauces. Almost all the cheeses that were consumed at that time were made from sheep’s milk. And to keep them longer, they were often put in brandy. What powerful sauces!

Mint, sage, marjoram and rocket (also known as caterpillar) were widely used as plants. The rocket was used a lot to give a spicy flavour similar to pepper. Because pepper, like sugar, was very expensive.

Pumpkins were mainly used as containers and especially for transporting food.

Some days of luxury the yolk was used to give creaminess to the sauces. But the eggs were generally sold to convents and monasteries where they were used to purify the wine.

1- First, chop the garlic in a mortar until the liquid is removed, then add and crush the almonds and arugula.
2- Little by little we add the olive oil trying to emulsify and bind the sauce and finally we add the honey so that it links everything well.

1- Crush the garlic well in a mortar, add the almonds and crush them as well.
2- Add the cheese, crushing it a little with your hands, and the egg yolk, continue stirring until everything is bound.